The population of galaxies that contribute to the HI mass function 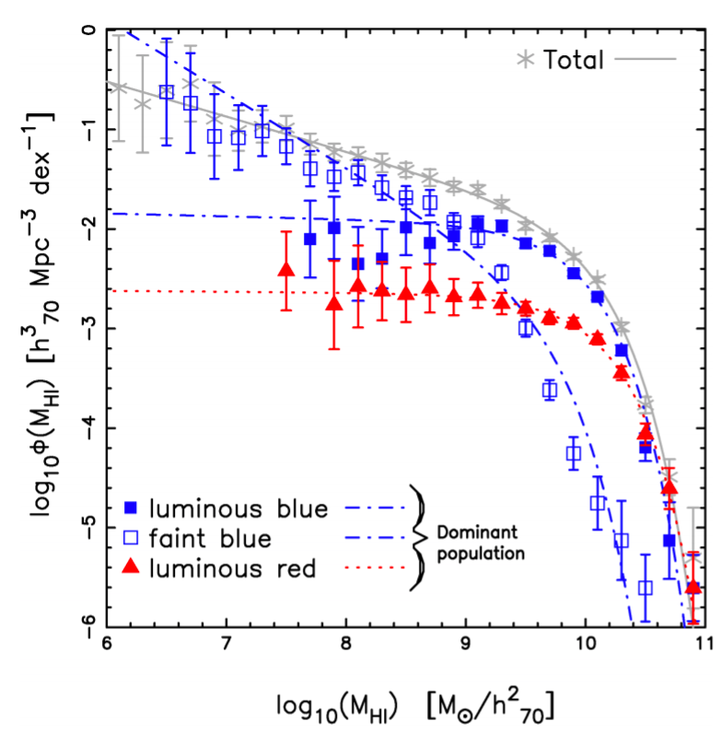 We look at the contribution of different galaxy populations to the atomic hydrogen (H I) mass function (HIMF) and the H I density parameter, ΩH I, in the local Universe. Our analysis is based on a sample of 7857 H I selected galaxies selected from a volume common to the Sloan Digital Sky Survey (SDSS) and Arecibo Fast Legacy ALFA (40 per cent catalogue – α.40) surveys. We define different populations of galaxies in the colour (u − r)–magnitude (Mr) plane and compute the HIMF for each of them. Additionally we compute the HIMF for dark galaxies; these are undetected in SDSS and represent ∼2 per cent of the total sample. We find that the luminous red population dominates the total HIMF for log10(MHIh270/M⊙)≥10.4⁠. The full red population – luminous and faint – represents about ∼17 per cent of the ΩH I budget, while that of the dark population is ∼3 per cent⁠. The HIMF about the knee, log10(MHIh270/M⊙)∈[8,10.4]⁠, is dominated by the faint and luminous blue populations, the latter dominating at larger masses in this interval. Their total contribution to ΩH I is ∼55−70 per cent⁠, the variation depending on the definition of population. The dominant populations at the low-mass end, log10(MHIh270/M⊙)≤8.0 are the faint blue and faint bluer populations, the latter’s dominance being sensitive to its definition. The full blue (blue–bluer luminous and faint) population represents ∼80 per cent of ΩH I. A bimodal HIMF suggested by our results is however not seen since the amplitude of the HIMF of the luminous red population is small compared to that of the luminous blue population.

Supplementary notes can be added here, including code and math.